Shortly after 3 am this morning, Ambulance 35 was sent on a call for service in Berwyn Heights, and the newly obtained second ambulance, Ambulance 35B, was placed in service with a volunteer crew. Only minutes later, at 3:09 am, Engine 353 and Ambulance 35B were transferred to Laurel Rescue's (49) station, since 49 was fighting a house fire in the 11000 block of Randy Lane. While enroute to 49's station, Engine 353 was dispatched to the house fire on the "working fire" taskforce. Upon arrival, the crew from Engine 353 took up a position on the rear of the house, where they worked to help extinguish the fire. 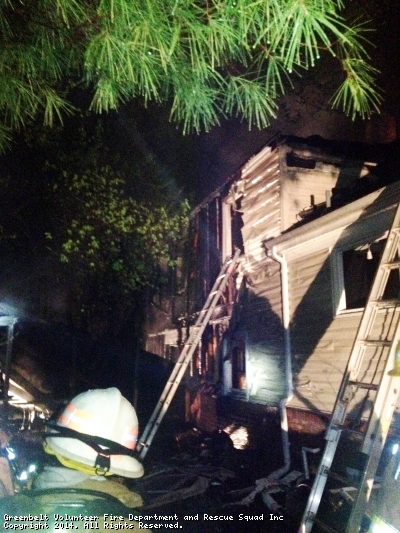 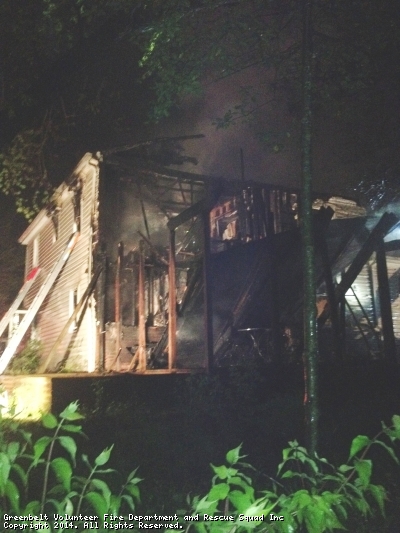 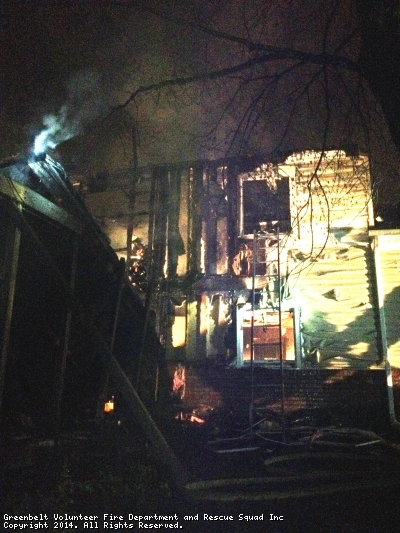 At 10:30pm, Engine 352 was dispatched as 3rd due engine to the 11000 block of Croft Court in Bowie for a house fire. The engine crew deployed a 2" stack tip line to the second floor and the attic area to extinguish fire that extended into the house from the garage.
➜
VSU Crew Runs Car Fire on the Parkway

At 10:50 p.m., the volunteers from GVFD responded to a car fire on the N/B Baltimore-Washington Parkway between Rt 495 and 193. E352 and Chief 35B arrived on scene to find the engine compartment of a sedan fully involved.
➜
House Fire in Berwyn Heights

On Thursday, January 29th, just after 9am, Reserve Engine 35 responded as the second due engine to a house fire in the 6200 block of Seminole Place in Berwyn Heights. Units arrived to find fire and heavy smoke showing from a one story, single family home.
➜
Two Alarm Fire in 8400 Block Greenbelt Rd On Sunday, November 16th around 7pm, Engine 353, Ambulance 358 and Chief 35B responded to the area of Greenbelt Rd and Hanover Pkwy for a motor vehicle accident with entrapment. Units arrived on scene to find one vehicle overturned.
➜
GVFD Runs One Overturned

Just before 4 pm this afternoon, units from GVFD were dispatched to the 7300 block of Hanover Drive for a personal injury accident. Engine 353, Ambulance 358 and Chief 35B arrived on scene to find a vehicle flipped on its roof.
➜
GVFD Runs Accident on the Beltway

Around 8:45 a.m., GVFD was alerted for a motor vehicle accident on the Outer Loop of the Beltway at the Baltimore-Washington Parkway. Engine 353 responded and evaluated the vehicle occupants once on scene.
➜
GVFD Runs Back to Back Fires in Beltsville 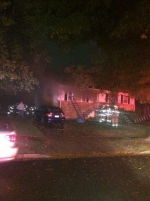 Shortly before 6 pm, Engine 353 and all three chief officers (Chief 35, Chief 35A and Chief 35B) responded to the 7500 block of Burdette Way in Beltsville for a house fire. Chief 35A was assigned to the Delta Exposure (ensuring the neighbor's house to the right of the house fire is protected).
➜
GVFD Runs Van vs. Bus Accident on BW Pkwy

Shortly after 1p.m. today, Engine 353 and Ambulance 358 responded to S/B Baltimore-Washington Parkway in the area of Riverdale Road for a personal injury accident. Units arrived on scene to find a van and a tour bus had collided.
➜
GVFD Responds to 2-Alarm Fire in Bladensburg

Shortly before 5 p.m., Reserve Engine 35 responded on the second alarm for a townhouse fire in the 5400 block of Doris Court in Bladensburg. The fire was quickly spreading to adjacent townhomes. The crew from GVFD was tasked with protecting one of the exposure buildings, requiring them to perform hy...
➜
Both Engines Respond to Bus Fire on 495

Shortly after 7 o'clock this morning, GVFD's E352 and Reserve Engine 35 responded with units from Branchville Fire Department to the inner loop of the Capital Beltway at Kenilworth Ave in Greenbelt for a commuter bus on fire.
➜
GVFD Responds to Beltsville Warehouse Fire

Shortly after 5 a.m., Engine 352 and Reserve Engine 35 responded to the 10400 block of Tucker Street in Beltsville for a building fire. An engine from the Beltsville Fire Company went on the scene with smoke showing from a commercial building.
➜
GVFD Transfers to Anne Arundel County

Around 6 p.m. on August 28th, the volunteers from GVFD and the new engine, E352, were transfered to Anne Arundel County Station 27 - Maryland City. The units from AA County were working on a first due house fire.
➜
Shed Fire with Extension in Greenbelt

Early this evening, Engine 353 responded to a report of a shed fire to the rear of a townhouse in the 7200 block of Morrison Drive in Greenbelt. Firefighters found a shed fully involved with extension to a deck attached to the house.
➜
Engine 353 fights house fire in Glenn Dale

At 10:47 am, Engine 353 and Ambulance 358 responded to the 11000 block of Prospect Place in Glenn Dale for a house fire. The Engine Crew arrived on scene to find Sheriff Deputies dealing with an irate homeowner, who had set his house on fire.
➜
Transfer leads to taskforce response for house fire Laurel 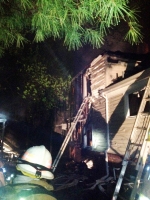 Shortly after 3 am this morning, Ambulance 35 was sent on a call for service in Berwyn Heights, and the newly obtained second ambulance, Ambulance 35B, was placed in service with a volunteer crew. Only minutes later, at 3:09 am, Engine 353 and Ambulance 35B were transferred to Laurel Rescue's (49) s...
➜
Working, wind-driven fire in Glenn Dale

Shortly before 5:00 p.m., Engine 353 and Chief 35B responded to the 9900 block of Locust Street in Glenn Dale for a working fire. Upon arrival, E353's crew covered the exposure house, deploying two standpipe packs off their leader line to extinguish a shed and a brush fire; saving two nearby homes f...
➜
Back to back traumas in Greenbelt on Thursday

At 7:21 p.m., Engine 353 responded to the Greenbelt Metro Station for a pedestrian struck by a train. While the Engine Crew was tending to the train accident, GVFD’s Ambulance was dispatched just a few moments later at 7:37 p.m.
➜
Greenbelt Road 2-Alarm Apartment Fire

Donations can be made at this link: http://engine35.square.site/home

Become a Volunteer with GVFD

This site has been viewed 474,525 times.
Calls
News
Events
Pictures
Apparatus
Maintained by the members and staff of Greenbelt Volunteer Fire Department and Rescue Squad Inc. Designated trademarks and brands are the property of their respective owners. Copyright © 2006-2022. YourFirstDue Inc. All Rights Reserved. Content on this web site is supplied by Greenbelt Volunteer Fire Department and Rescue Squad Inc. YourFirstDue Inc. cannot be held responsible or liable for any content, text, pictures, or any other media found on this web site.
Management login
Powered by